After the ceramic body forming stages and thw following digital printing steps, the ceramic production process involves a final application of grits or glazes, sometimes in significant amounts. Failure to apply the correct process parameters can sometimes lead to issues in this application, which can compromise the ceramic surface in a number of different ways, from both an aesthetic and technical perspective.

The appearance of small surface holes or pinholes, either localized or distributed evenly over the surface, is certainly the most frequent among the various kinds of defect.
There are many possible reasons for this problem, and they can usually be found not just inside the kilns but, above all, in the stages preceding the firing process as well: especially along the glazing line. 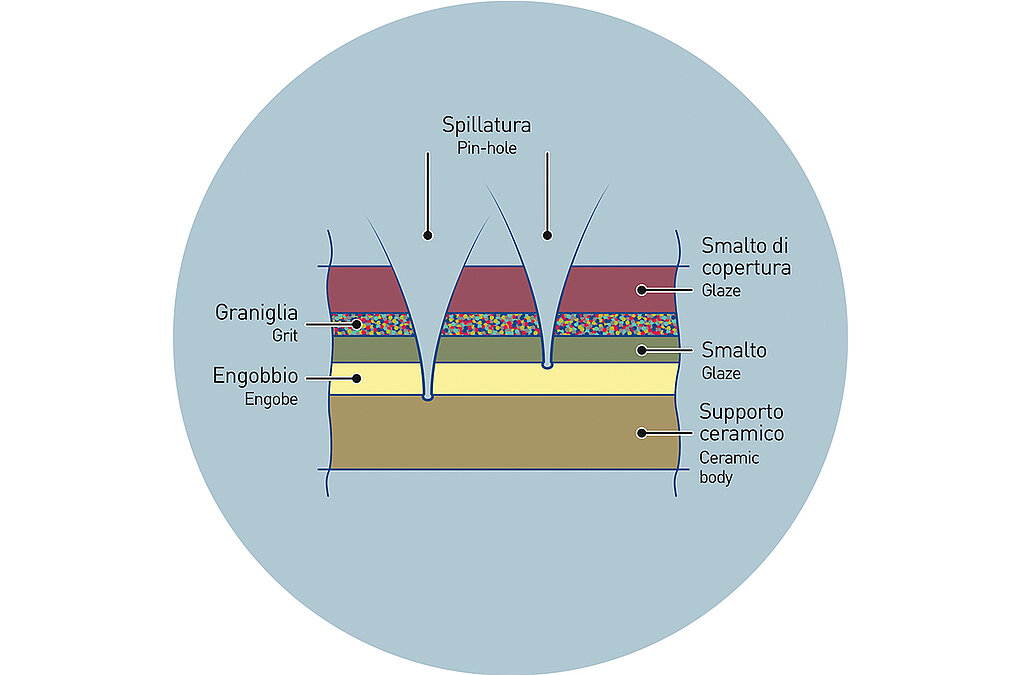 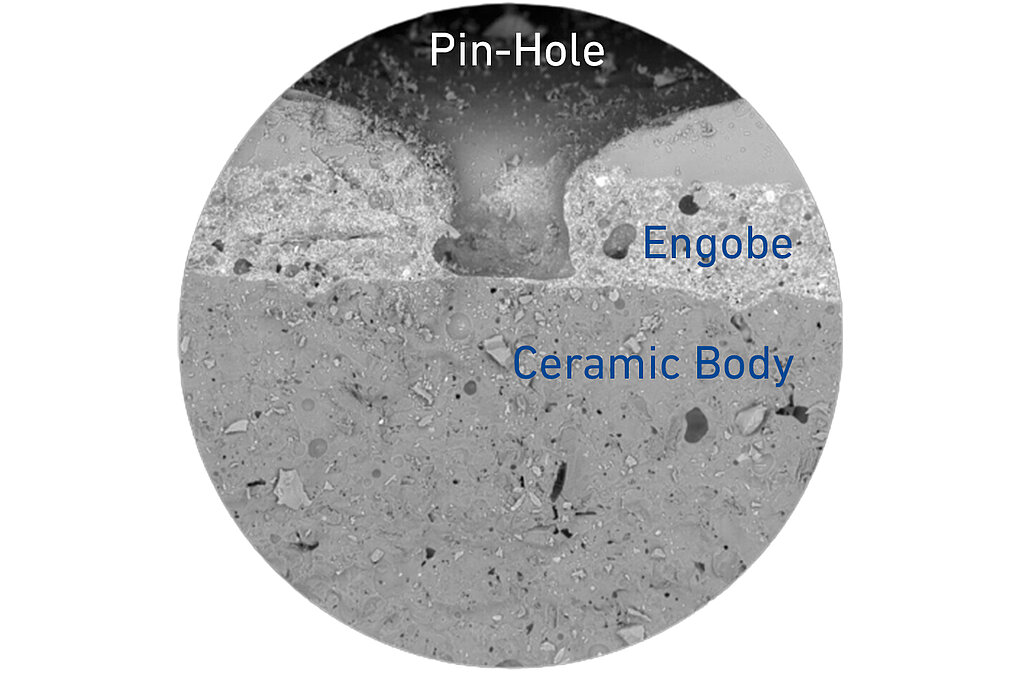 The main scenarios leading to this problem are illustrated below.

The first scenario to be examined is the temperature of the ceramic material as it leaves the dryers, where calibrated hot air sources subject the unfired tiles (with a moisture content that can vary from 5% to 7%) to a thermal cycle to reduce the residual moisture to almost zero. 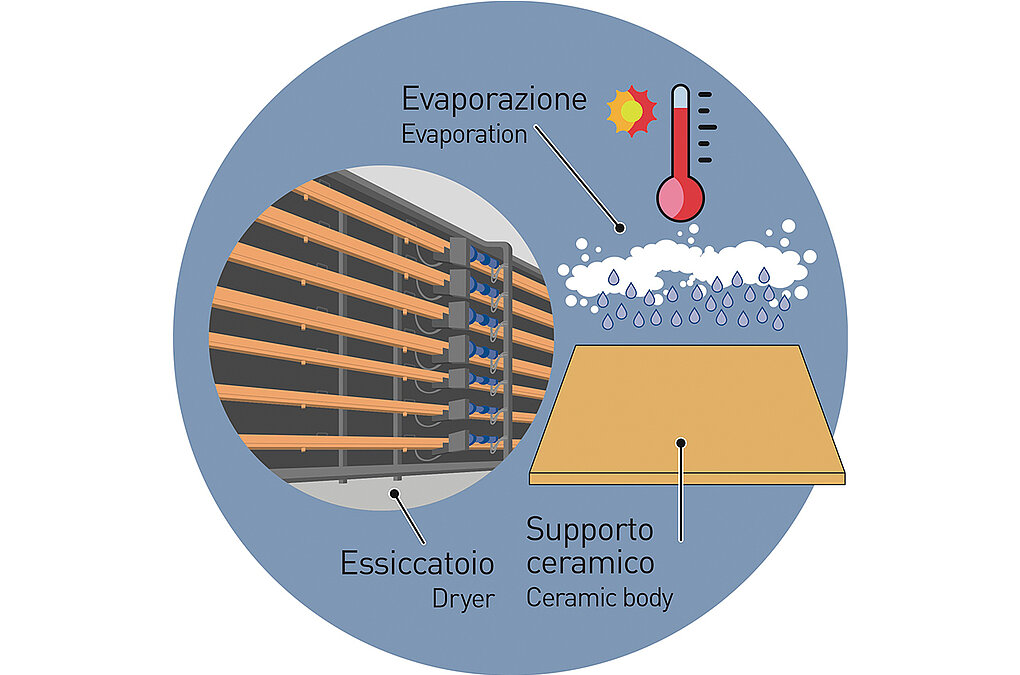 This temperature must normally be relatively high so that subsequent wet applications along the glazing line will lose water quickly enough through evaporation.

Having the work-piece at a high temperature aids all the applications along the glazing line by ensuring that it can dry properly between one application and the next. This prevents any excess residual water from creating mixing points between the different phases. 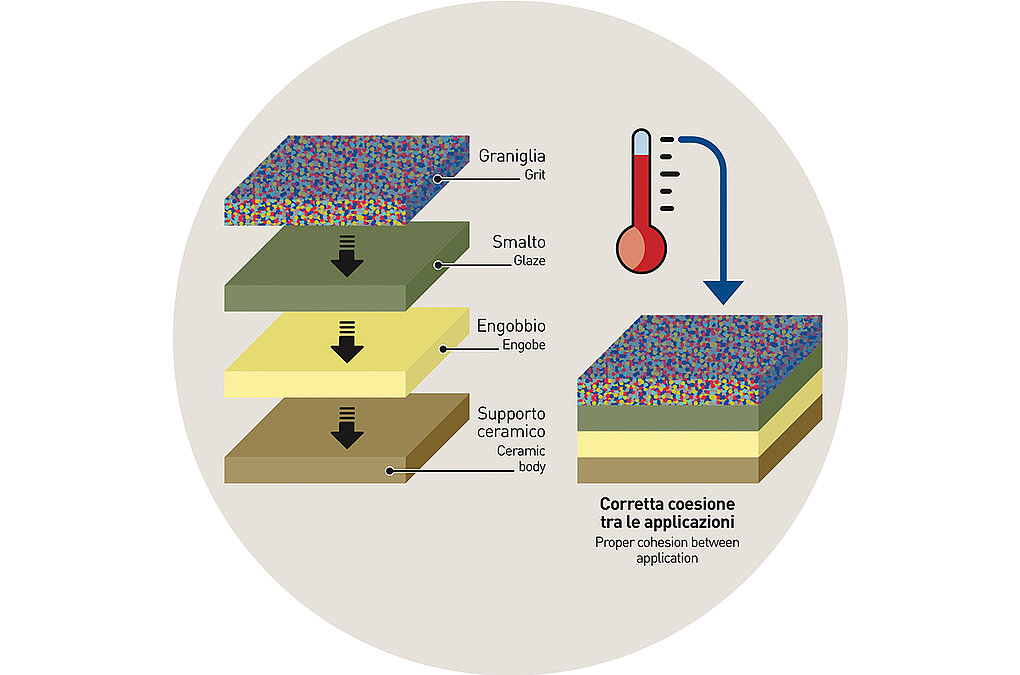 At the same time, while it is true that a high temperature promotes proper water evaporation during applications along the line, it is equally true that sufficient moisture must be maintained throughout the line to ensure perfect cohesion of the applications.

If the ceramic body temperature is too low, it could cause uneven drying of the glazes or grits used as the final application before the tiles enter the kilns. Uneven drying could cause issues that result in various kinds of post-firing flaws at the inter-phase (i.e. the point of contact between two application layers). Pinholes are one of the many possible outcomes.

Since we cannot make a detailed list of the wide range of causes and effects, we can simply say, by way of example, that mixing between different phases (or layers) and abnormal release of water trapped inside the glaze during firing (which tends to swell inside the work-piece) are among the most common cases to be considered.

To summarise.
The problem starts from a lack of cohesion between the various application layers because the unfired work-piece is at the wrong temperature. 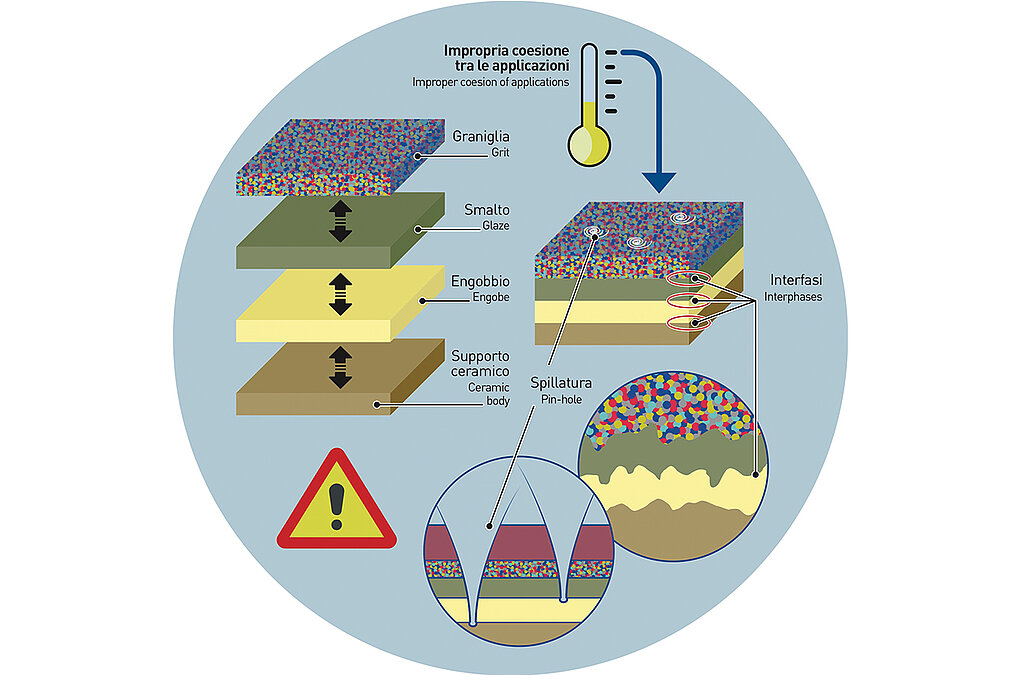 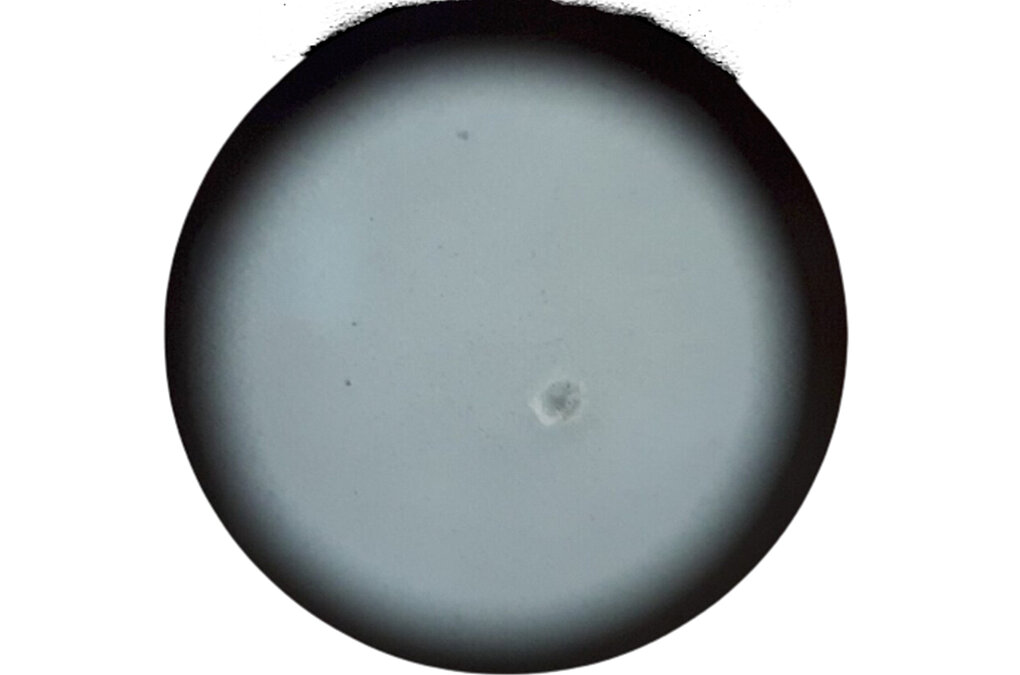 Increasing the temperature of the ceramic body as it comes out of the dryer would certainly help regulate the drying process. However, using high temperatures throughout can make the drying too fast and uncontrolled, potentially compromising proper cohesion between the various applications along the production line. 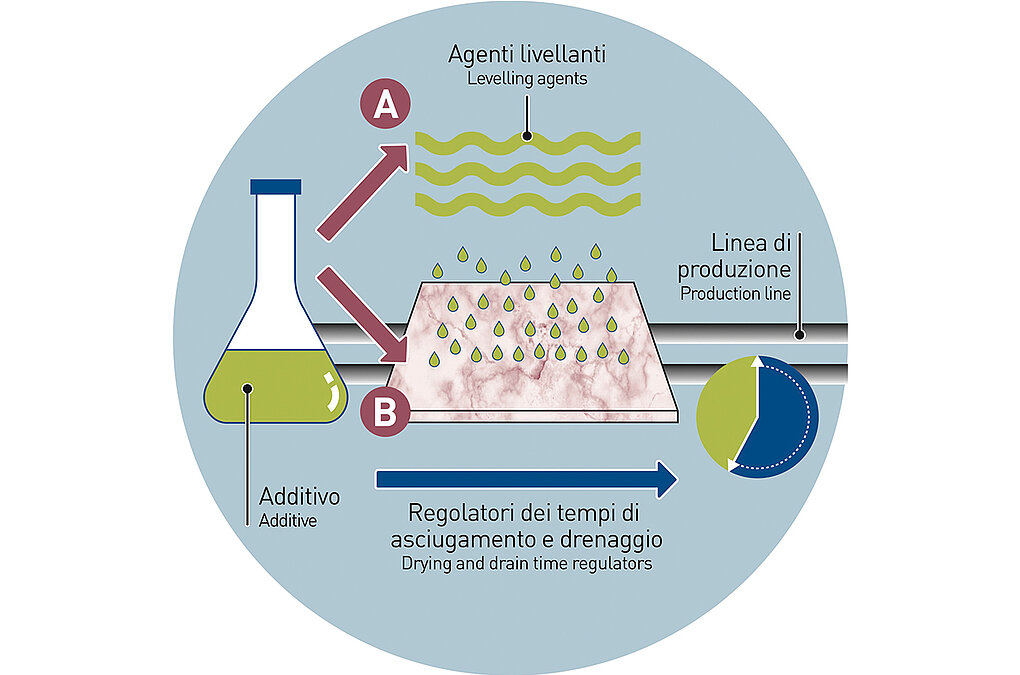 For this reason, the most significant action that can be adopted is putting suitable levelling additives and/or mediums into the glaze to regulate the drying and drainage times (making them more even). This will ensure good cohesion between the layers so that they can adequately accommodate subsequent applications on the line.

3. Excessive amount of organic material (inside the inks)

Pinholes or small holes can also occur with graphics that include veining or dense ink patterns.

The use of significant amounts of ink means a high hot organic material content (which does not evaporate during the first firing). If the surface covering of glaze or grit applied to the ink is also considerable, the following problem may arise:
Some of the organic material in the ink may NOT reach the combustion phase before the glaze (or grit) melts.
The organic material combustion will continue even after the glaze has melted, at which point it can no longer escape from the substrate, and therefore forms gas bubbles that remain trapped inside the glaze/grit. The bubbles created on the glaze surface (now vitrified) explode, creating holes and pinholes that damage the ceramic. The bubbles nearest the tile surface are sometimes visible to the naked eye, even if they do not explode. 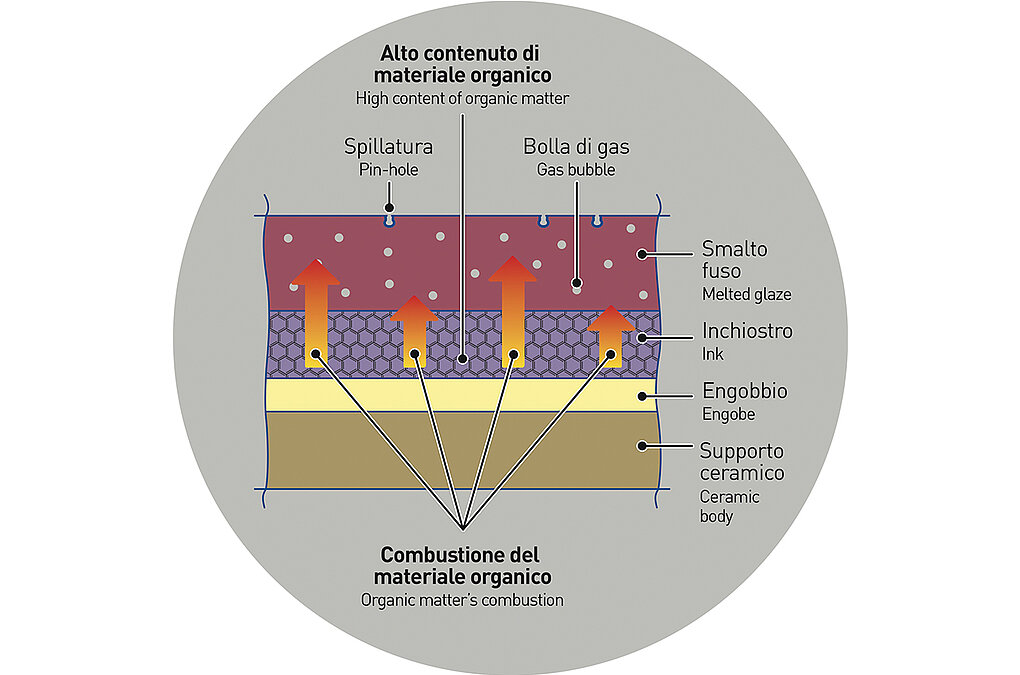 For the sake of completeness, the formation of these defects is in some cases due to certain pigments that interact abnormally with the ceramic glass.

On the assumption that, for obvious reasons linked to industrial productivity, it is not possible to change the firing cycle, one of the most effective remedies is to use solvent-based inks as they offer better combustion. This means that most of the combustion gases are eliminated by combustion before the glazes start to melt.

4. Chemical incompatibility between the engobe, grit and final glaze

An improper balance between the materials being used can also promote this flaw.
Specifically, between the engobe (+ glaze), grit and final glaze covering, which are normally chosen and used to create the best glaze conditions in terms of compatibility, homogeneity and fusibility during the firing process. 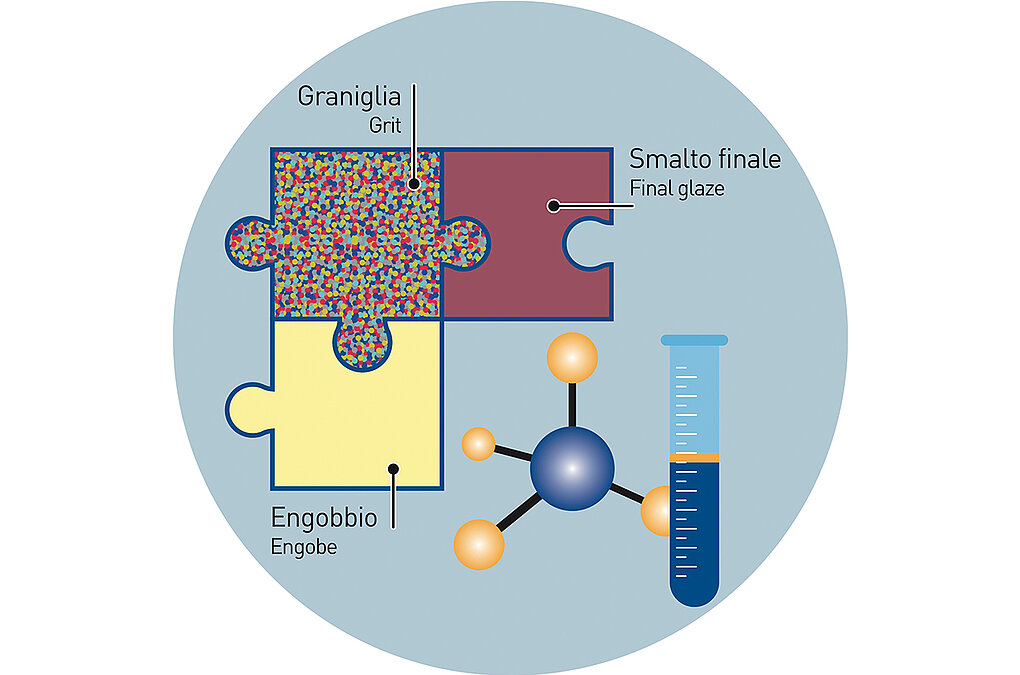 This problem is usually evident during the initial production of a new ceramic design when, for example, a new combination of materials is used. Chemical incompatibility between the chosen materials inevitably promotes various kinds of problems and flaws at the application stage.

In this case, measures must be taken in two parallel directions: on one hand, the colour works should focus on the glaze or grit formulations (in fact, in some cases the grit or glaze may be unsuitable for the type of technology or firing cycle used by the customer), and on the other hand, the parameters should be reviewed by a rheological studio, which could identify the right additives to use in the mixtures in order facilitate the best possible application.

The correct firing cycle is generally a very important variable when it comes to reducing or eliminating the flaws mentioned above. In view of the mechanisms just described, ignoring productivity and environmental impact for the moment, the simplest action to take in an attempt to eliminate the problem would be to increase the firing temperature slightly in order to:

This would, in effect, be the simplest action to attempt. 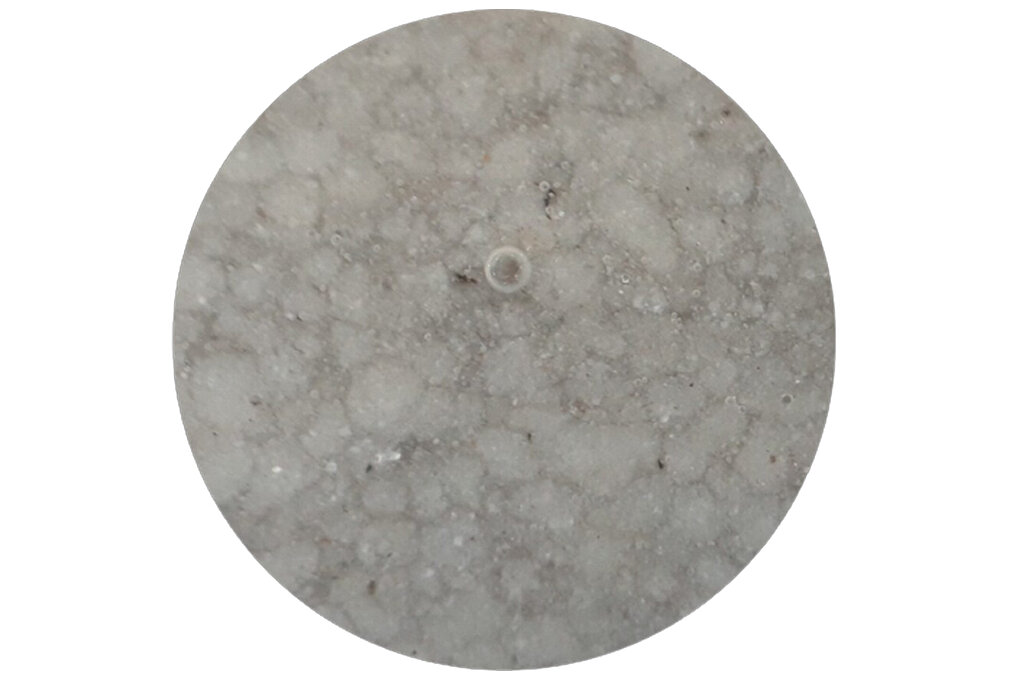 However, cost containment and an appropriately increasing focus on environmental challenges rightly push companies to minimise the amount of time the ceramic spends in the kilns. This tendency indirectly leads to increasingly challenging choices regarding the materials to use and the production line set-up.

That is why a possible change in the kiln temperature setting is often considered when attempting to solve the problem, but lengthening the firing cycle is normally one of the last actions taken.

#18 Water-based digital glues: what benefit do they promote?

Chemically speaking, water-based digital glues can be generally considered as organic polymers and…

#17 Digital glues: what are they and how do they work?

There have been for years on the market different kind of DIGITAL GLUES for ceramic production,…

#16 Black core: origins of the defect and problem-solving actions

#15 Glazes' repellency phenomena: additives for applications before and after digital printing process

The ink-jet decoration has surely eliminated several critical issues bringing out, however, new and…

#14 Additives for ceramic mixture: an overview

The ceramic mixture, before being subjected to the forming step (during which the atomized powders…