Process water play a very important role within ceramic activities, being involved in a wide range of production’s steps. If one the one hand they are strictly necessary to the course of the work, they can lead on the other hand to problems when they do not fits the required production parameters.
It is not easy to fix on the map the very point at which issues emerge, since they are heterogeneous and non-standard. It is therefore established to conventionally identify their presence (on the our metro tube) in the production step where they appear first:

2. Origin of the waters

As many know, we assume that ceramic production is a closed-cycled system within which process water mostly derive form in-house production activities. 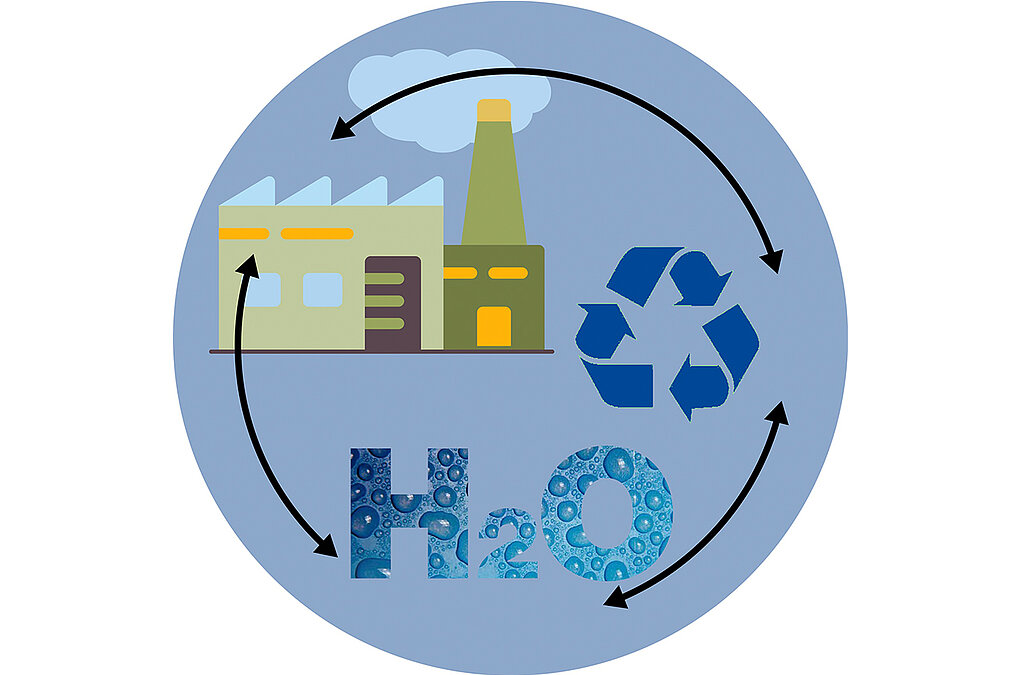 It is therefore a question of WASTE WATER mainly deriving from the grinding department as well as from the post-firing activities, such as cut and polishing. This implicitly means that ceramic companies, as is well known, tend to recycle water both in order keep costs and to reduce environmental impact: a question, now more than ever, extremely relevant and unavoidable. Together with this recycle’s activity, it is also important to take into consideration all waters that do not derive from the company’s internal closed-cycle but that come directly from outside. 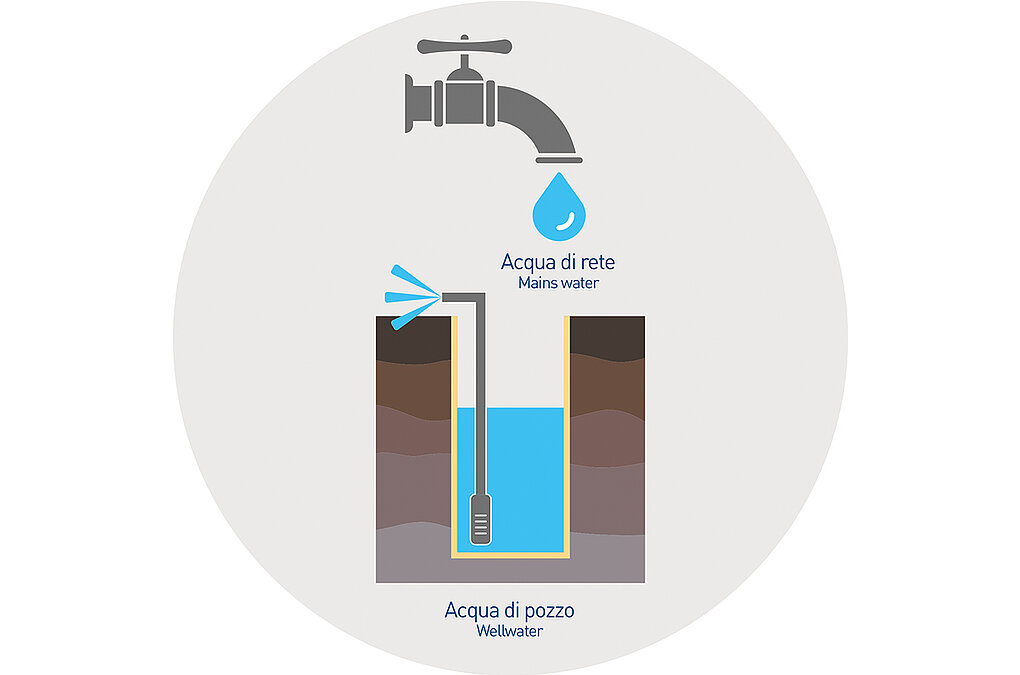 We are basically talking about:

Process waters – i.e. all those waters that move to storage tanks from the glazing line, grinding mills or other process steps – are made of a very heterogeneous mix. For the purpose of our investigation about the issues that they may provide, we limit here a short list of the most important contents: 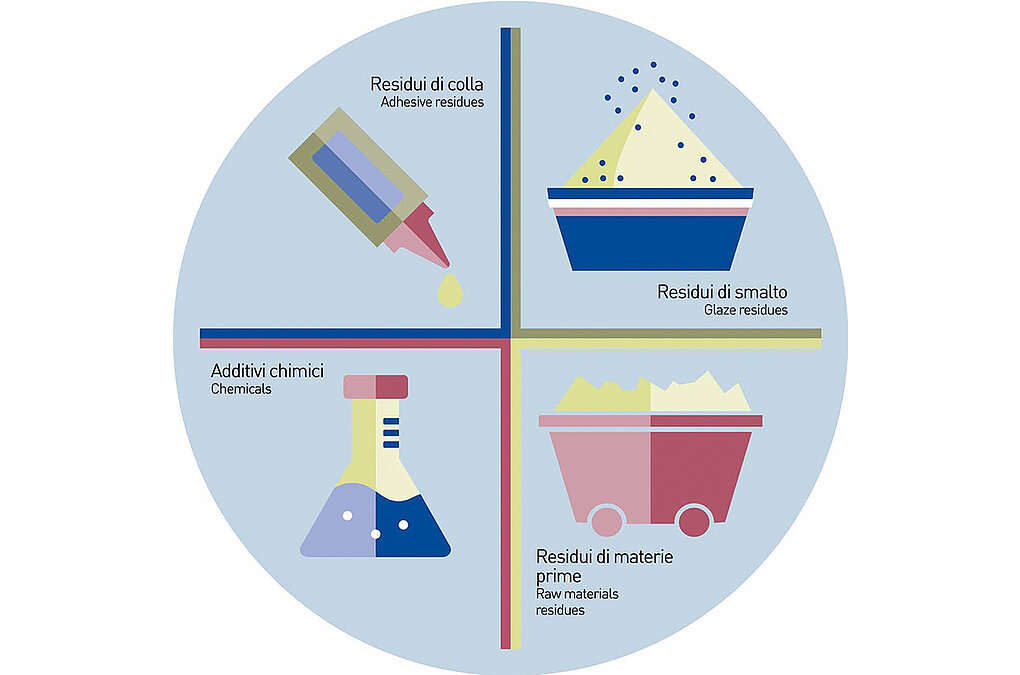 How do these elements affect the application?
How can they interact with processes?

The presence of ORGANIC MATTER within process water together with its environmental exposure means that waters can enrich themselves over time both of bacterial colonies and microorganisms leading to very rapid degradations.

Bacterial degradations may produce in turns an important increasing of WATER CONDUCTIVITY that, simplifying, we could define as the ability of a liquid to transmit electricity. 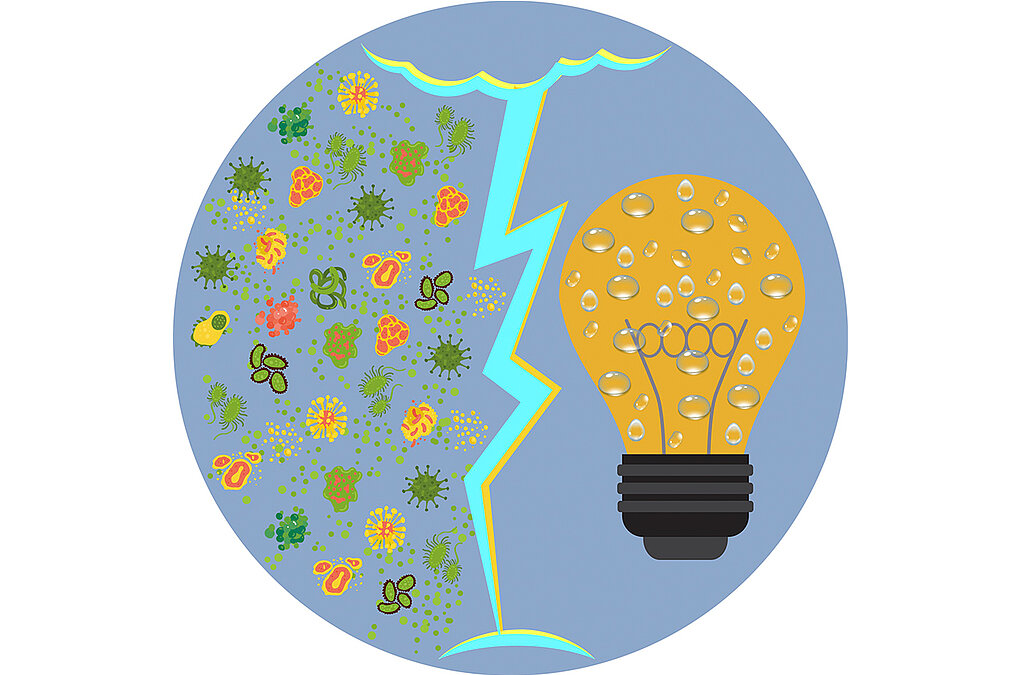 Why is it important to constantly check the water conductivity’s values?

An high conductive water can be a troublemaker during application because it may affect, for example, the slurries or glazes’ viscosity. In some cases the conductivity reaches such high values that – to fit within the proper parameters and so to proceed with a proper application – more water must be added in the process, therefore affecting both the productivity as well as the environment.

The critical issue promoted by waters’ conductivity (that chemically speaking is due to an excessive presence of multivalent cations such as calcium and magnesium) also and especially relates to groundwater that, coming from deep under the ground, is by its nature subject to variations depending on the season. Especially on our territory (Sassuolo district). 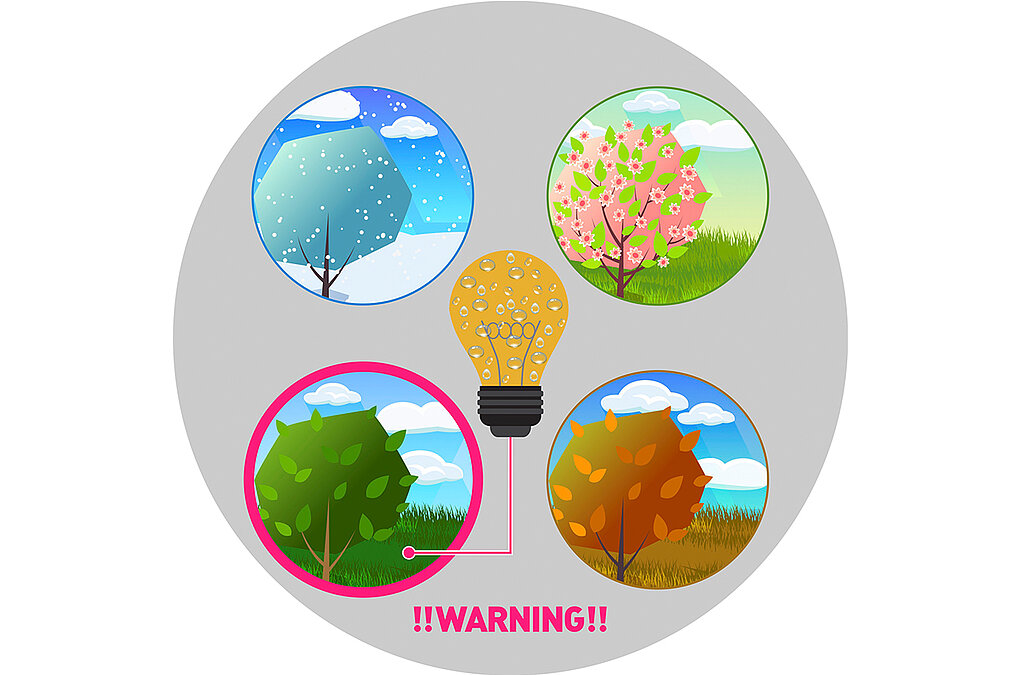 During summer, for example, the massive withdrawal of groundwater, together with the less frequent rains, lead to a dip in the waters level and therefore to an increase in the ionic concentration (and so in the conductivity). It’s not by chance that problems related to conductivity can much further emerge at the end of the summer months.

Process waters often require different kinds of treatment in order to perform at the best and avoid production problems. These treatments can vary from company to company according with the specific production parameters.

Water clarification process is certainly one of those.
It is developed through a flocculation and decantation process, followed by a filter-pressing process of the suspended particles inside the water. 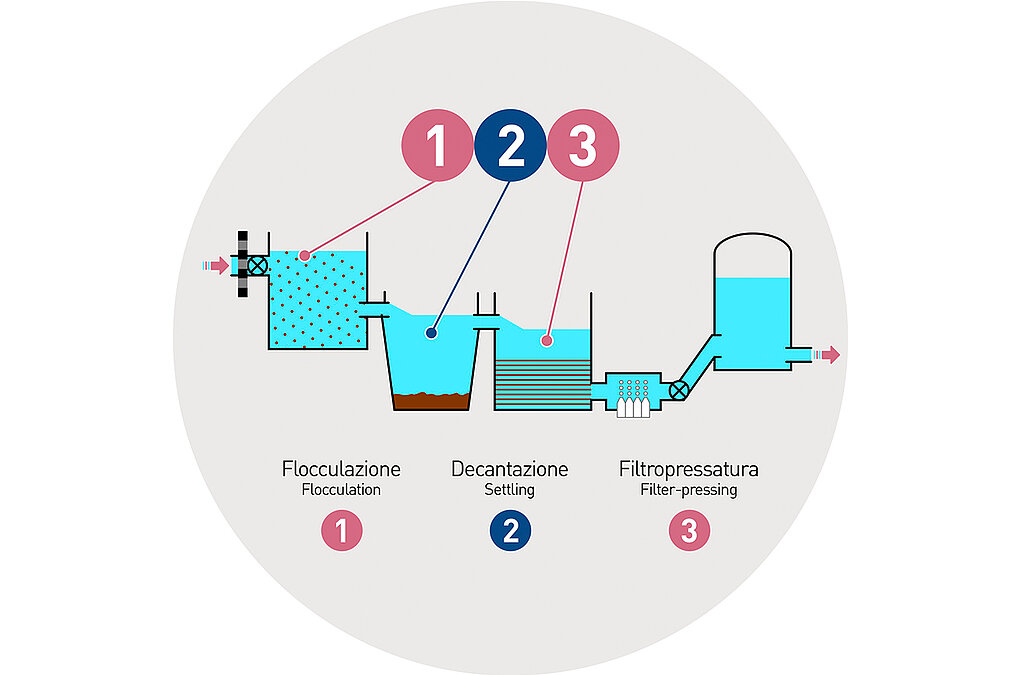 Beside the water clarification process, it would be important to proceed with a detailed study of the water cycle in order to take action with a SANITIZING and/or PRESERVATION process. The main target is obviously to break down microorganisms and bacteria by means of proper preservative and sanitizing agents. A grinding water containing bacteria may for example lead to a bacterial proliferation inside the slurry after the grinding process. The situation could get even worse thanks to the slurries organic content (of which bacteria feed). 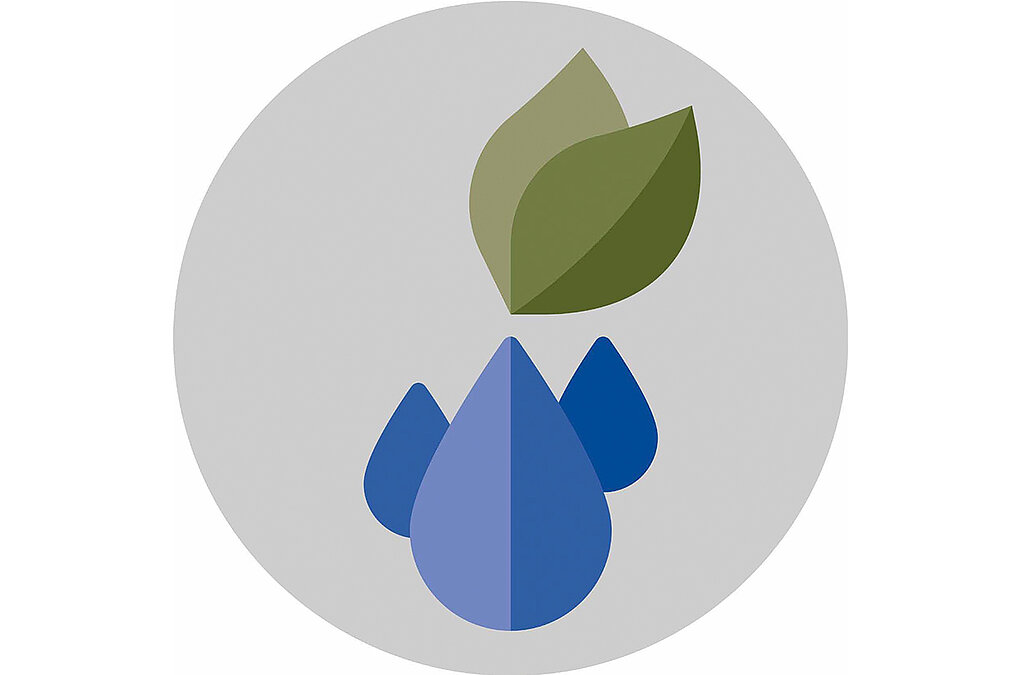 It is also very important to check the water basic parameters and especially its pH value. These controls should be used to make any preventive corrections in case of very non-standard parameters (in our case the ideal water’s pH value is about 8.5 / 9). 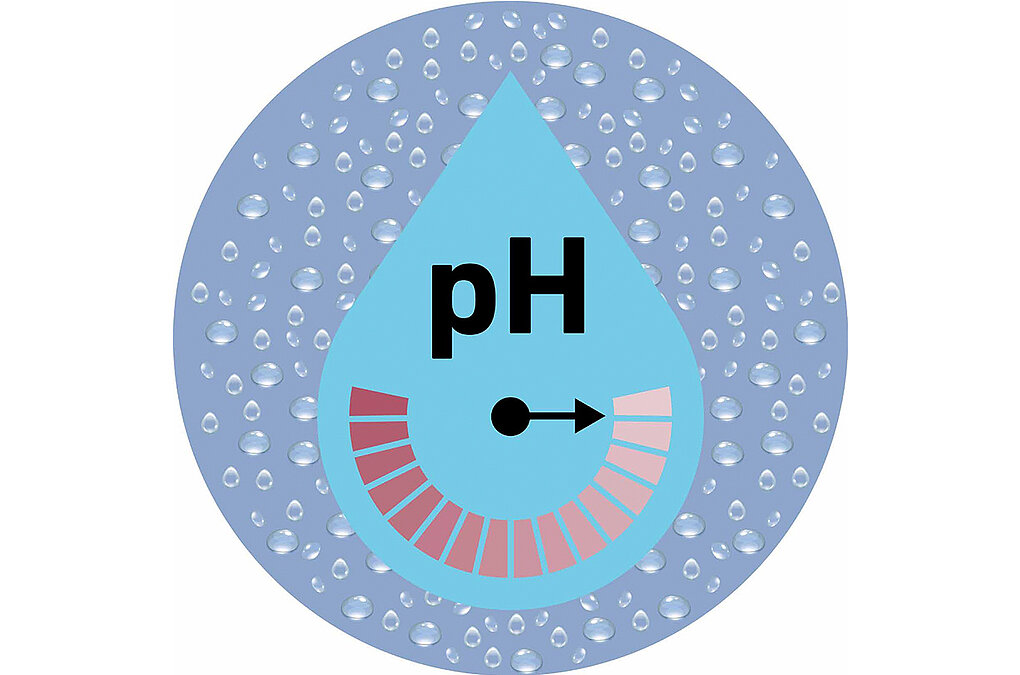 Two last measures that could be useful to avoid problems. 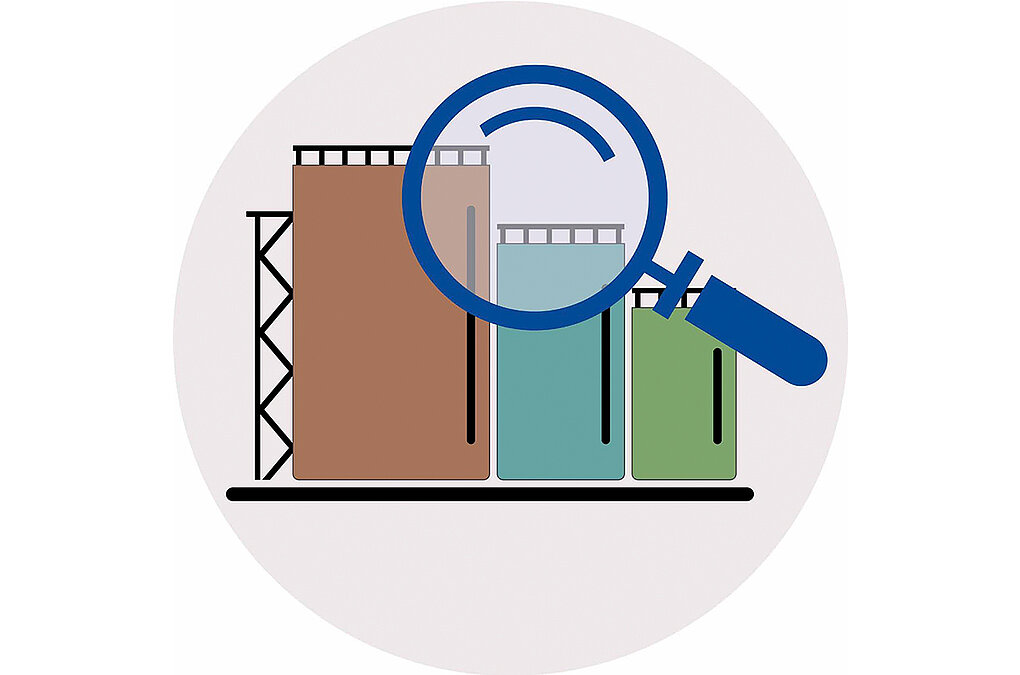 Antibacterial protections, already used in several fields of industrial production, had become in…

#05 Cracks and silica recession inside the pores after surface protection treatments: what's going on?

As we all know, lapping and polishing processes that are necessary to provide ceramic tiles with the…

#04 Process water and production problems: what do you need to know?

Process water play a very important role within ceramic activities, being involved in a wide range…

#03 Bacterial degradation of semi-finished materials. What to do?

In ceramic, semi-finished products are all those materials (in our case, aqueous suspensions) that…